WHAT IS A "WHEATED" BOURBON
AND WHY IN DEMAND?

"Wheated" bourbon is a subset of bourbon that hides in plain sight. In fact, you may have already enjoyed wheated bourbon without even knowing it. There is no requirement for distillers to indicate that the bourbon is wheated, so most do not advertise this fact. However, mellow, smooth, and easy-drinking terms often indicate a wheated bourbon... 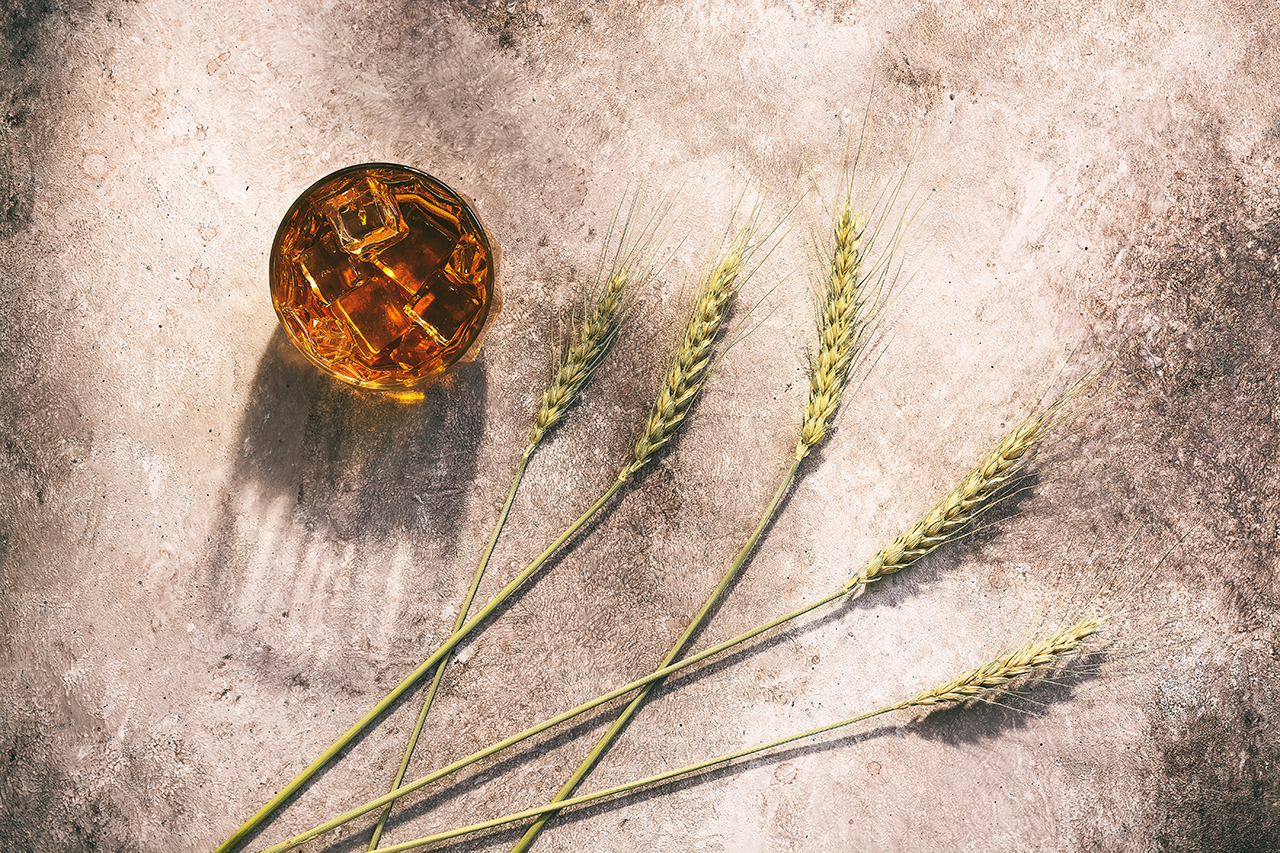 What Is a Wheated Bourbon?

First, let's define what bourbon is, as it does have a legal requirement. It must consist of at least 51% corn and use newly charred American oak barrels for the aging process. Typically, bourbon distillers use rye and malted barley in the other 49% of the mash bill. Wheated bourbon simply replaces the rye with wheat, either in whole or part. Wheated bourbons meet the requisite requirements for being a bourbon yet have their own distinct flavors.

With rye as the secondary grain in bourbon, it inherits some of the rye's bold, spicy, sharp flavors. Wheat has a much milder flavor profile than the rye, taming down the sharpness a bit and giving it a softer impact. In addition to being smoother, the wheated bourbons are also sweeter, thanks to the corn and wheat interacting. Corn is inherently sweet, and wheat's more subdued characteristics allow that sweetness to come through completely.

Often, bourbon distillers will use more corn than the 51% minimum corn requirement to help cut down the harshness of the rye. When using wheat instead of rye, distillers tend not to use additional corn, which aids in the complexity of the sweet notes. The more subtle wheat lets other flavors through without as much corn, like fruit, floral, toffee, and honey, along with flavors from the barrel like oak and vanilla. All of these flavors coming through lead to a very complex flavor profile.

Grain quantity isn't the only factor that affects the flavor profile. The location it was grown, the season, and the harvesting time will all impact the flavors when used in a wheated bourbon. With the complex mingling of flavors and its sweet and soft profile, wheated bourbon is an excellent way for someone to get into the bourbon world, even straight or neat. It can help people get more comfortable with bourbon, eventually expanding their palate into non-wheated, spicier expressions.

The Science Behind Wheated Bourbon

Malting a grain releases enzymes that usually feed the germinating seed and instead use them for fermentation. In the germination process, enzymes break down the long starch molecules into shorter sugar molecules that a sprouting plant can use to feed on as it stretches through the soil to the surface. Early on, people figured out that this same process could be altered to ferment into alcohol. When exposed to fruit sugars, yeast will naturally break down the sugars into alcohol.

The issue involved with trying to ferment grains, as opposed to fruits, is that the long starch molecules must be broken down into shorter sugar molecules, monosaccharides, or disaccharides. The yeast will eat these sugars and become alcohol. Malted barley and some other grains have enough enzymes to break down their own starches and other starches in the mash as well.

Malting wheat is almost impossible due to the elasticity of wheat. While that makes it a great ingredient in making dough, it is more difficult to malt, creating a thick mash that plugs up the stills. However, wheat is one of the most harvested crops globally and is usually readily available. With the addition of malted barley to the mash bill, the starches in the wheat can be broken down.

Rye was used as the flavoring grain in whiskey in places like Kentucky, Maryland, and Western Pennsylvania because farmers in those areas grew rye over wheat because it was resistant to blight and a hardier, more resilient crop. Wheat came into prominence as a flavoring grain by distillers who were looking to set themselves apart from other distilleries.

You get spicier flavors like clove, nutmeg, and pepper with rye. Sometimes the finish of a good bourbon has a nice little bite to it; that would be thanks to the rye. Wheated bourbon is sweeter and softer. If you want to understand what softer means, simply eat rye bread and compare it to wheat bread. That will give you an idea of the difference in their flavor profiles.

There are some other things to be aware of, however. For example, many mash bills have a mix of rye and wheat. Combining the two flavoring grains keeps some of the spiciness of the rye while letting the sweetness of the corn come through, giving the nose and palate a lot of depth. Others will also contain other exotic grains, meaning cereal grains that can be legally used in bourbon but are not commonly done. These include grains like quinoa, buckwheat, rice, oats, and sorghum, changing the flavor profile further.

In addition, some bourbons don't even have malted barley in them. As explained above, the malted barley is necessary to break down the starches in the wheat so it can be fermented. However, the United States allows the usage of artificial enzymes in the fermentation process instead of using malted barley. A couple of examples of artificial enzymes include Diazyme and Amylex, which are typically banned overseas but not in the United States.

Wheated bourbon has become wildly popular due to its approachability. It's a milder bourbon experience, offering a sweeter and less harsh taste. Suppose you're interested in trying out bourbons or just expanding your spirits palate in general. In that case, a wheated bourbon is a great way to get started and become acclimated to bourbon. The sweeter taste will allow you to enjoy the notes, flavor profile, and finish of bourbon while expanding your palate.

A great wheated bourbon which has the added depth and complexity of being finished in P.X. Sherry casks is Dareringer Kentucky Straight Bourbon Whiskey.