BOURBON VS WHISKEY VS SCOTCH

Imagine you enter a liquor store, and hanging signs mark the aisles. You look up and see "whiskey," "bourbon," and "scotch" above one aisle whose shelves hold hundreds of gleaming bottles of straw-colored, amber, or brown spirits. 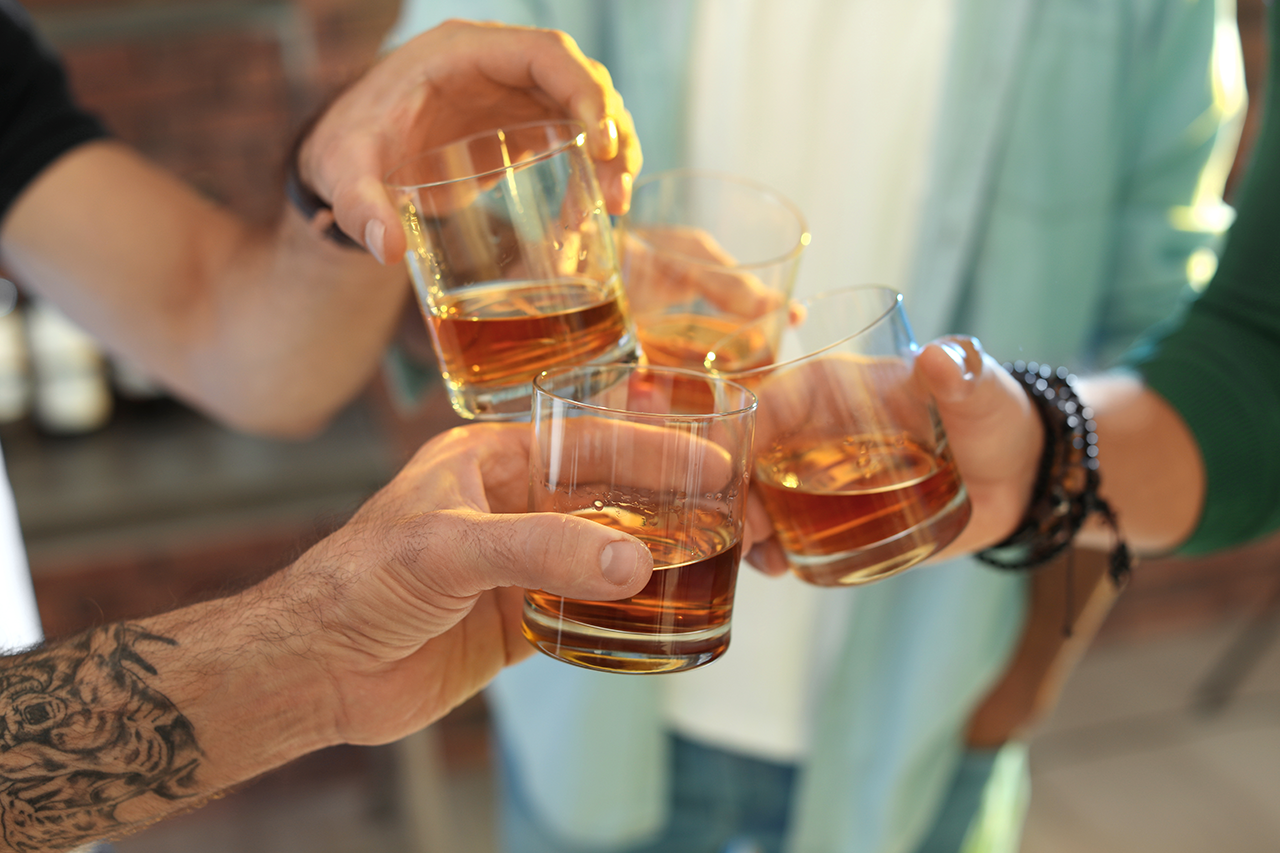 Imagine you enter a liquor store, and hanging signs mark the aisles. You look up and see "whiskey," "bourbon," and "scotch" above one aisle whose shelves hold hundreds of gleaming bottles of straw-colored, amber, or brown spirits. With that much choice, you may wonder which bottle is the one for you or even what distinguishes these types — whiskey, bourbon, and scotch — from one another. If you've ever found yourself in this dilemma, this guide may be helpful to you.

Whiskey is a spirit distilled from grains and aged in wood barrels. The combination of grains that go into a whiskey's composition is its mash bill. The most common grains featured in mash bills are barley (malted and un-malted), corn, rye, and wheat. Depending on the type of whiskey, it may contain one, some, or all of these. Some whiskeys, by law, must contain a minimum amount of a specific grain to qualify as a particular variety of whiskey.

Each grain type contributes its own flavor and character to the spirit. Broadly speaking, barley adds a roasted quality, corn brings sweetness, rye is sharp and peppery, and wheat often imparts a different level of sweetness and a degree of softness on the palate. Most, if not all, distillers use malted barley in their mash bills. These are by no means the only grains that whiskey distillers use. Some less-common additions include millet, oats, and spelt. Rice and hybrid grains such as triticale aren't unheard of in the world of whiskey production as well.

Whiskeys usually undergo at least two distillations before entering the barrels to age. Coming off the still, the whiskey spirit is clear, and sitting in the barrels gives it both color and flavor. Oak is the most common type of wood used for whiskey barrels. The same laws that govern mash bill compositions also define the characteristics of the barrels used during aging and the length of the process.

Bourbon is a particular type of American whiskey. In fact, it's the definitive American whiskey, considered the native spirit of the country. Protected by U.S. federal law, bourbon has a legal definition that governs its production. The law states that for a spirit to qualify as bourbon, its production must take place entirely in the United States, its mash bill must contain at least 51% corn, and its maturing must take place inside new oak, charred barrels.

There are rules concerning the alcohol content at different stages of production, too. It can't distill at higher than 80% ABV, can't enter the barrels at higher than 62.5% ABV, and must be bottled at a minimum of 40% ABV. Additional regulations relate to the aging of bourbon. Though there's no minimum length of time that the spirit must age to qualify as bourbon in general, it does need to age for two years to qualify as straight bourbon. Also, if the bourbon has aged for fewer than four years, its bottle must provide an age statement.

These guidelines contribute to the characteristic taste, texture, aroma, and appearance of bourbon. The majority corn content leads to a generally sweeter profile, and the caramelized wood sugars and char of the fire-treated barrels interact with the spirit to produce complex flavor compounds, lending notes such as vanilla, caramel, fruit, leather, tobacco, and baking spices.

Scotch is a type of whiskey that comes from Scotland — only "Scotch whisky" is spelled without the "e" because of the translation to English from the Scottish form of the original word, "usquebaugh," which was derived from the Irish and Scottish Gaelic term for "water of life." Scotch is another one of those whiskeys that must adhere to a particular set of rules. The laws that govern scotch production state that the drink must:

One of the characteristics of scotch is its smoky flavor. This quality stems from the scotch method of malting — the process of steeping barley in water to allow it to germinate, producing deeper flavors as well as enzymes that facilitate fermentation. Once the barley has malted, distillers dry it over fires (traditionally of peat, which contains moss and other organic matter), whereby the barley absorbs the smoke.

As for aging, there are some common practices among distillers. The barrels used for maturing scotch often previously contained bourbon. Aging in this environment allows the scotch to take on notes characteristic of the American spirit, namely vanilla and oak. Afterward, some distillers may transfer the matured scotch to another barrel for a secondary maturation period. Often, the barrels used at this stage have previously held sherry, port, red wine, rum, or cognac. This optional step adds further depth of flavor to the scotch, complementing the deep notes contributed by the bourbon casks.

Among scotches, there's a distinctive, much-prized category known as single malts. A single-malt scotch is distilled only from malted barley at a single distillery. Many scotch drinkers prefer single malts because of their distinctiveness and complexity. Single malts also tend to be pricier because of the limited number of resources that go into their production.

How To Choose Between Bourbon vs. Whiskey vs. Scotch

The whiskey that's right for you ultimately depends on your preferences. In a general sense, scotches and bourbons have different flavor profiles. The fire-drying of the malted barley imparts a smokiness on scotch, while bourbons tend to have a sweetness owing to their high corn content and complex interactions with the charred barrels. In the former, you may be more likely to notice notes of malt and spice, with an overall buttery quality. In the latter, vanilla caramel and oak are common flavor notes, with a more mellow quality.

Of course, there are countless variations in the flavors and characters of whiskey, but these descriptions may help you get started with finding the right bottle for your tastes. Whiskey, scotch, and bourbon are complex spirits with rich histories, and tremendous mastery goes into their making. The best way to navigate those complexities is to experience them first-hand.