CHURCHILL DOWNS: THE MOST EXCITING
TWO MINUTES IN SPORTS

The track is more than just the venue for top thoroughbreds rumbling around a dirt track and spectators sipping frosty mint juleps under broad-brimmed hats. It's also the culmination of cultures, ambitions, and circumstances over more than 150 years of American history. 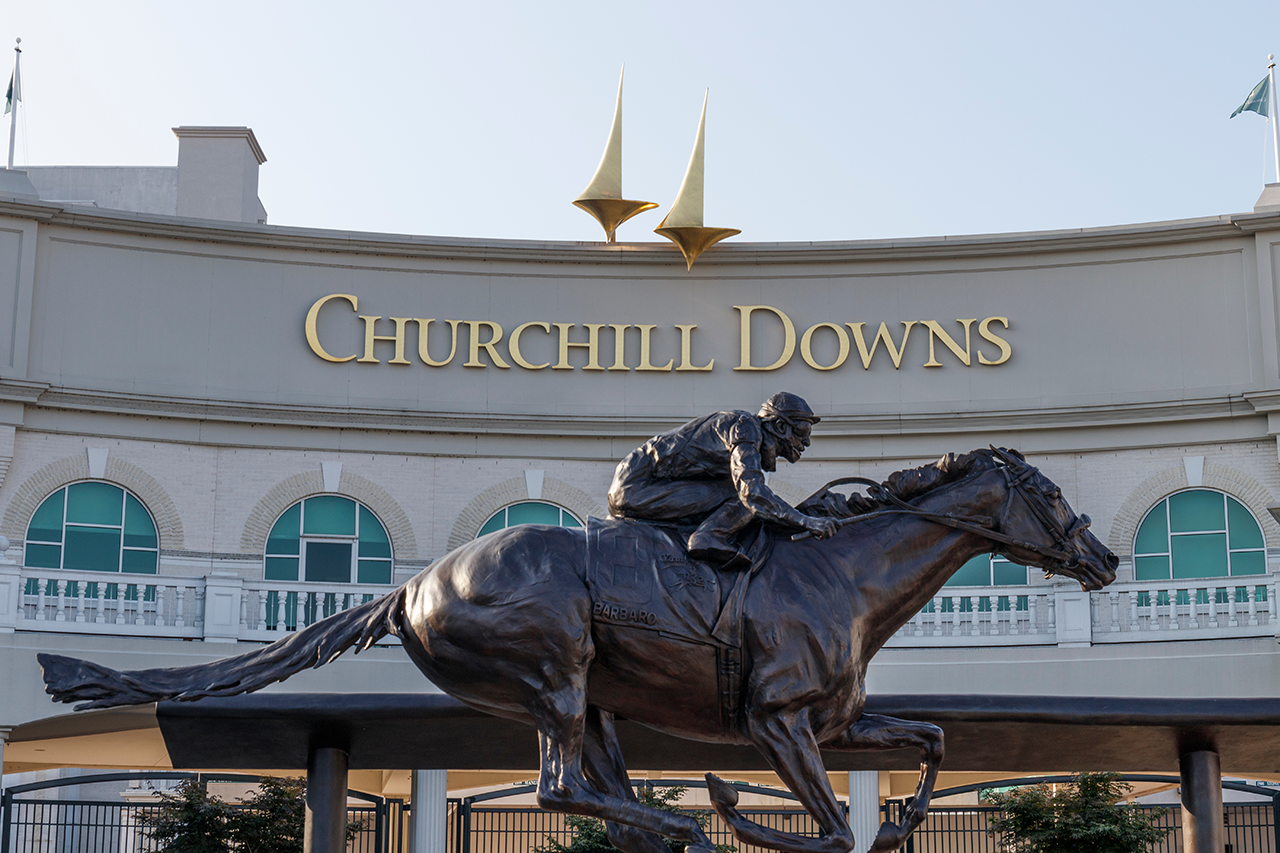 Every year, on the first Saturday in May, equestrian fans and party-lovers alike converge on Central Avenue in Louisville, Kentucky — the location of Churchill Downs. Churchill Downs is among the best-known racetracks in the world and host to one of the most prestigious horse races in the United States: the Kentucky Derby. The track is more than just the venue for top thoroughbreds rumbling around a dirt track and spectators sipping frosty mint juleps under broad-brimmed hats. It's also the culmination of cultures, ambitions, and circumstances over more than 150 years of American history.

Kentucky has a rich history of horse racing that dates back to the 18th century. The state's original settlers largely came from Virginia, an area that already had established horse-breeding and distilling cultures. According to legend, the breeders and distillers among Kentucky's settlers were likely attracted to the area's limestone waters, which were ideal for producing both high-quality whiskey and healthy equine bones. Thus, the foundation for what would come to be the state's best-known cultural pillars — horse racing and whiskey — came to be.

At the time, horse races took place on private racetracks, which were built on farms. Over time, these private tracks grew larger and larger, both in size and in popularity. Then the 1790s saw the advent of Sportsman's Hill, a private track owned by William Whitley, a Revolutionary War veteran and Virginian who'd settled in Kentucky. It was Whitley who'd pioneer a characteristically American style of horse racing: counterclockwise and on dirt racetracks. This contribution to the sport would guide thoroughbred racing in the United States thereafter.

The Birth of Churchill Downs

The story of Churchill Downs begins with one Colonel Meriwether Lewis Clark Jr., the grandson of the famous explorer General William Clark. Born in 1846, Colonel Clark was the child of Meriwether Lewis Clark Sr. and Abigail Prather Churchill, the latter of whom came from one of Kentucky's original families. In 1872, the younger Clark would travel to Europe, namely France and England, where he'd rub elbows with the era's leading figures in horse racing.

Through these interactions, Clark grew the idea of founding a jockey club and establishing a racetrack in Louisville with the aim of showcasing the city's racing stock. Two years later, in 1874, his uncles John and Henry Churchill agreed to lease to him 80 acres of land just a few miles south of Louisville at the time. It was after John and Henry that Clark would eventually name the storied racetrack.

To finance the construction of his racetrack on this leased land, Clark sold membership subscriptions to the racetrack to interested investors. Offering them at $100 each, he sold 320 subscriptions and raised $32,000 (equivalent to almost $800 million today). With this money, he built the original structures of the Downs — six on-site stables, a grandstand, a clubhouse, and the porter's lodge.

May 17, 1875, marked the Downs' first official race day. It consisted of three stake races: the Kentucky Derby, the Kentucky Oaks, and the Clark Handicap, each inspired by an established race in England (the Epsom Derby, the Epsom Oaks, and the St. Leger Stakes, respectively). In the very first Kentucky Derby, and before an estimated 10,000 spectators, 15 thoroughbreds competed across 1.5 miles, a quarter-mile longer than today's Derby length.

The winning horse of that first Derby was Aristides. Notably, the horse's trainer and his jockey — Ansel Williamson and Oliver Lewis, respectively — were both African American men, as were 12 others among the jockeys that day.

The years between the first race and the turn of the 20th century saw some milestones in the history of the track. In 1883, for example, the name Churchill Downs came into formal use, and 1895 saw the construction of the now-famous Twin Spire grandstand. By the 1890s, however, Churchill Downs was facing financial difficulty, which was due in part to Clark's preference for long races during a time in which shorter meets had grown in popularity.

In light of money troubles, Clark had sold the Downs to William Applegate in 1893, but money continued to be a problem into the 1900s. Fortunately, this would begin to change in 1902 with the hiring of Colonel Matt J. Winn to turn around the track's fortunes. Skilled in marketing, Winn had the idea to promote the Kentucky Derby as a stage for more than just horse racing. He wrapped the event in a romanticism that highlighted fashionability and sought to appeal to both the elite and the middle class. With Winn's changes, the Downs saw profits.

Also influential were Winn's changes to betting. In addition to lowering the minimum wager amount from $5 to $2 (around $150 to $55 in terms of today's money), he brought the system of parimutuel betting to the Downs. This system cuts out the bookmaker, pools together all of an event's wagers, and shares the pool among everyone who's made a winning bet, minus a percentage taken by the house. Coincidentally, gambling had become outlawed in most of the country, and horse racing in Kentucky presented one of the very few available options for gamblers.

The conditions for the Downs' success had aligned.

As the 20th century progressed, Winn continued to exercise his influence at Churchill Downs, eventually becoming president of the establishment in 1938. After his passing in 1949, Winn's influence remained evident in the traditions he'd instituted. Aside from the glamour and the overhauled betting system, he helped to usher in other beloved Kentucky Derby associations, like the singing of "My Old Kentucky Home" to kick off the event and the design of the Kentucky Derby trophy.

Much has changed since the Downs' beginnings in the 1870s. It now spans 147 acres, provides luxury suites, and attracts crowds of more than 150,000 spectators for the Kentucky Derby. Speaking of the Derby, it has run every year since that first race in May 1875, making it the longest-running continuously held event in any major sport. With that in mind, though it's impossible to predict for certain who'll be the first to cross the finish line on its track, Churchill Downs is home to one of the surest bets in sports.