In order for a whiskey to legally be called a "bourbon" or "straight bourbon whiskey", distillers must adhere to specific requirements. One of those rules is only to use brand-new oak barrels, which must be charred... 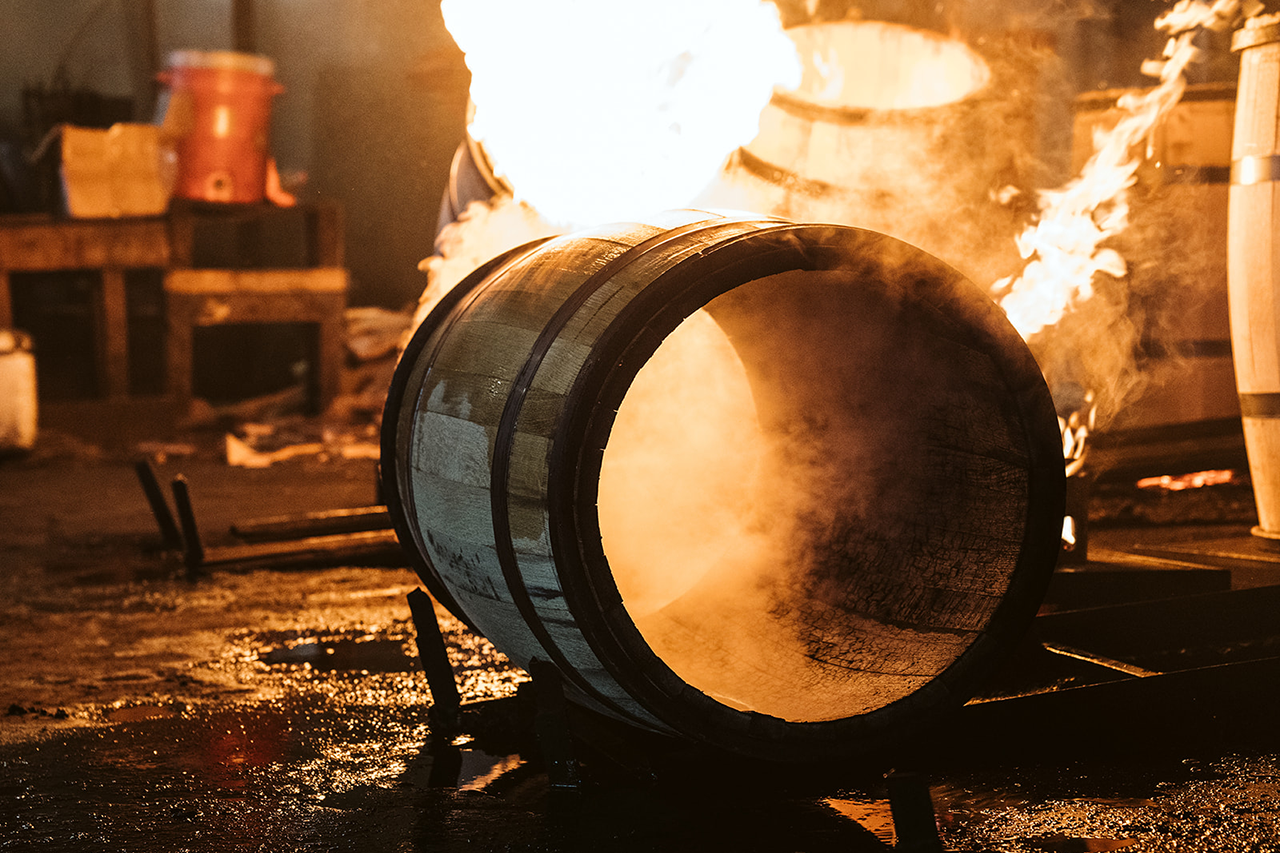 Before placing any product in the barrels, they must be charred for a certain amount of time. Barrels are typically charred between 15 and 55 seconds, although some distilleries have been experimenting with longer char times. The term barrel char level refers to the specific amount of time distillers char the barrels.

Charring changes the oak to produce the best reaction between the whiskey and wood as it ages. Because distillers cannot add color or flavor to a bourbon, extracting the best characteristics of the oak is paramount to creating the best result.

The science behind charring barrels concerns a small group of compounds that play integral roles in the aging process:

The use of barrels dates back to the Roman era when barrels needed to be reused. Charring could've originated as a way to remove the smell of seafood or other food product before it suddenly becomes a whiskey barrel.

Charring vs. Toasting a Bourbon Barrel

Charring a barrel differs from toasting a barrel. Winemakers toast a barrel, which is a more gentle process. The barrels are warmed to bring out a dull earthy-colored toast. Charred barrels are burned and resemble a pit fire after it's extinguished. It also causes the sugars to caramelize, imparting a smoother, creamy, sweet-tasting bourbon.

It's possible to toast barrels before charring them to coax the sugars from deep inside the wood's fibers. You can find this unique combination in Rabbit Hole Distillery's award-winning bourbons and rye whiskey.

Level one is only for 15 seconds and barely exceeds a toasted wood. Home distillers primarily use this barrel char level. Level one works for whiskeys not meant to be aged long. The quick barrel char allows the whiskey to take on some of the barrel's color and oak characteristics. You aren't likely to find distilleries using barrel char level one.

Level two charring is also pretty uncommon with distilleries. It's mostly used to “finish a barrel.” You should start to see some vanilla and caramel notes, which occur because hemicellulose and lignin are breaking down. If you spot some coconut flavors, that's because of the lactones in the oak that start dying off at higher char levels.

Some distilleries use this level to toast their barrel before charring to bring in the coffee, vanilla, and spiciness to the finished bourbon. The caramel tones don't overpower the char but provide a nice sweetness.

There is only a five-second difference between levels two and three, but it makes a significant difference. Combine barrel char level three with a couple of years of aging, and you'll have a well-rounded bourbon with more spicy and earthy flavors. Think caramel, brown sugar, and toffee because the hemicellulose starts breaking down into wood sugars. This process is visible by looking for the wood to caramelize inside the barrel.

The fourth level is for 55 seconds. You may hear it referred to as “alligator char.” The name relates to the appearance of the barrel as it begins to crack and peel in a shiny, rough pattern that resembles the skin of an alligator. As the barrel peels, the bourbon has more surface area to contact during aging. The multiple layers that the bourbon comes into contact with help pull more unique and subtle flavors. You might wind up with vanilla blended with the deeper char notes, such as leather and dark fruits.

Level four char also provides another benefit — natural filtration. Barrels lined with carbon can extract some undesirable compounds that younger whiskeys are prone to, such as sulfur compounds. Have you used a water filter and noticed the black specks? Carbon is excellent for filtration. The carbon in a wood barrel can act the same way, filtering out the unwanted products while allowing the bourbon to seep back into the barrel's interior wood.

Charring a barrel beyond 55 seconds is allowed, but it might not be something you readily find in brands. Determining the right mix of higher char levels with various distillates takes years, so it's not something that is widely practiced. Longer charring doesn't necessarily equal a better bourbon.

Understanding the science behind barrel char levels can be confusing. Essentially, there are four main benefits of barrel charring:

While the origins of barrel charring are unclear, the process has become an integral part of bourbon-making. Since the rules call for all new oak barrels, the charring process is a necessity that helps distillers impart the best characteristics into their final product.