BOURBON VS WHISKEY
WHICH TO CHOOSE?

Some people use bourbon and whiskey interchangeably. However, bourbon is a type of whiskey. All bourbons are whiskeys, but not all whiskeys are bourbons. You'll find some important differences when comparing bourbon vs. whiskey... 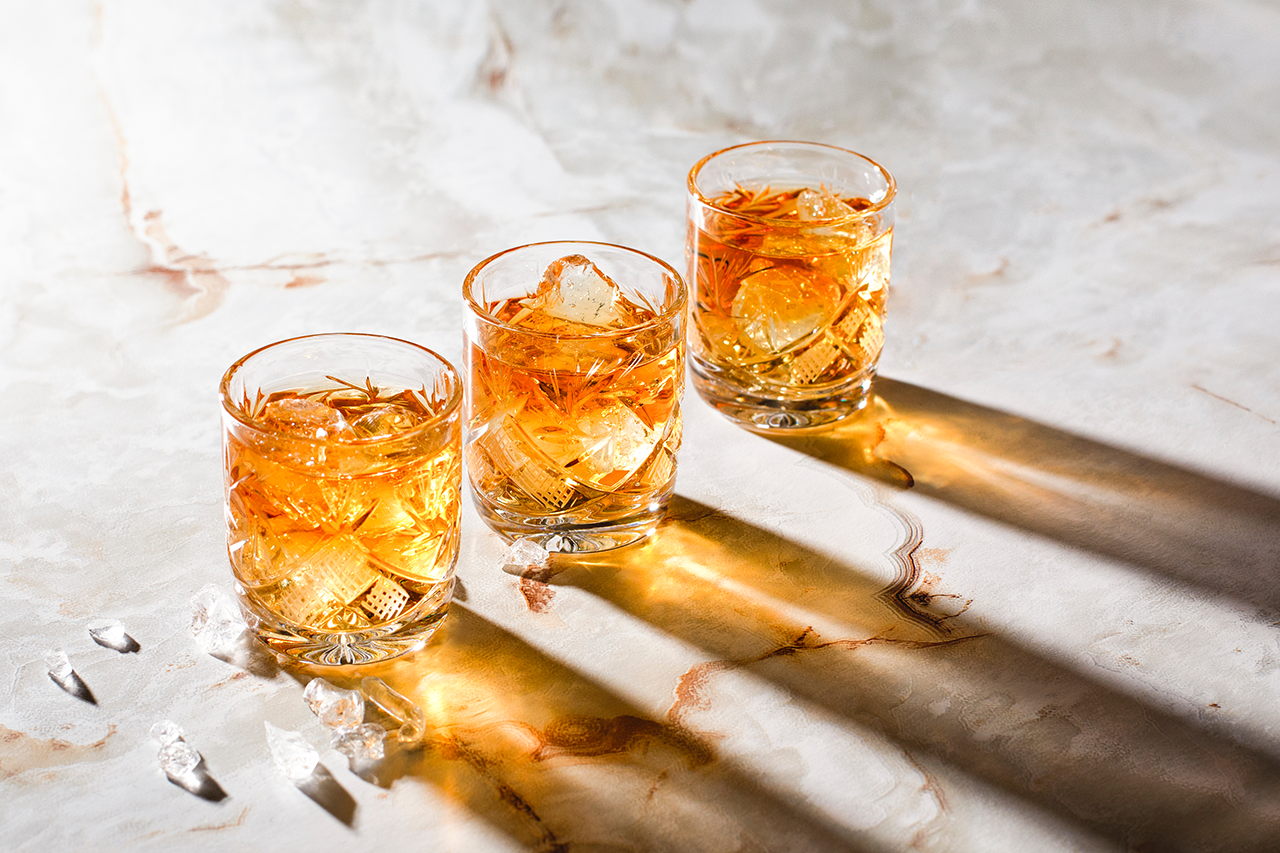 If you're new to the world of distilled spirits, you might not have yet developed a preference for bourbon or whiskey. Here's what to know when it comes to bourbon vs. whiskey and determining which spirit is right for you.

Legal Requirements to Be Called a Bourbon

For a distilled spirit to be labeled and sold or exported as a bourbon, it must adhere to specific production methods and meet rigid legal requirements, including:

Another confusing point for some people is whether the correct spelling is whiskey or whisky. Both words refer to the same distilled spirit; the "e" primarily differentiates where it's produced. When you see whiskey, it usually comes from the United States or Ireland, whereas whisky typically comes from Canada, Japan, or Scotland.

To better understand the regulations surrounding bourbon, here is more information on how the rules differ for bourbon vs. whiskey production.

Bourbon must be produced in the United States to meet the legal definition. In 1964, the U.S. Congress declared bourbon America's only native spirit and labeled it a protected indigenous product. That means any "bourbon" produced outside the country cannot be labeled and sold as such. Ireland and Scotland have similar regulations regarding the requirement for Scotch and Irish Whiskey to be produced on their respective islands.

Bourbon originated in the mid-1800s and is closely associated with the South. Ninety-five percent of bourbon comes from Kentucky, with production totals increasing by more than 100% in recent years. Any bourbon bottled with "Kentucky bourbon" on the label must have been distilled and aged in the state.

Bourbon vs. Whiskey: The Type of Mash

Bourbon and whiskey use different grains. The law requires distillers to use a grain mash of at least 51% corn for bourbon. The rest can be any combination of grains.

Other whiskeys use malted grains, such as corn, barley, wheat, and rye. If a bottle says "straight" whiskey in the United States, it has one particular grain type. That means it's corn whiskey, malt whiskey, rye whiskey, or wheat whiskey. Another example is Scotch whisky. Any whiskey labeled Scotch whisky must be produced in Scotland only using malted barley and water. Other grains are optional.

Although mash types differ between bourbon and other whiskeys, the nutritional content remains the same. A 1.5-ounce shot of whiskey or bourbon has 97 calories and 14 grams of alcohol.

Bourbon regulations dictate the distillate must go into new charred oak barrels. Distillers cannot add flavor or color to a bourbon, so it becomes crucial to extract the best characteristics of the oak.

Charring the barrels creates chemical changes within a small group of the barrel's compounds. These compounds help impart flavor when distillers add bourbon to the barrels. Typical char times range between 15 and 55 seconds.

Most distillers use new white oak barrels for aging. The white oak is porous and helps filter and age the bourbon. It's also sturdy enough to withstand aging for up to 12 years. Once barrels have held bourbon, distillers cannot reuse them to create a new batch. Regulations require bourbon to age in brand-new barrels only. Many bourbon barrels end up being reused for other spirits, including Scotch.

The law doesn't dictate minimum aging times for bourbon. Bourbon labeled "straight bourbon" must remain in the barrel for at least two years. However, any straight bourbon that is not aged at least four years must include its age on the label. Whiskey produced in the United States doesn't have an aging requirement, either. In theory, a few days in a barrel could still qualify as whiskey. However, to be called a "straight whiskey," it must age for at least two years in oak barrels.

Once a spirit is bottled, it stops aging. You don't hold on to a 12-year-old whiskey for eight years and suddenly have a 20-year aged whiskey.

Other Types of Whiskey

Bourbon is only one type of whiskey. Other whiskey types produced in the United States and abroad include:

This American-style whiskey is made with at least 51% rye grain mash. Using rye instead of corn results in less sweetness compared to bourbon.

Although similar to bourbon, Tennessee whiskey has some notable differences. Both require a minimum of 51% corn mash and new oak barrels for aging. The big difference is what happens before a Tennessee whiskey goes in the barrel, called the Lincoln County Process. The clear, fresh whiskey is steeped in or filtered through charcoal chips. The purpose of charcoal filtering is to help remove harsh flavors, resulting in a smoother whiskey. To be called a Tennessee whiskey, it must be distilled in Tennessee and undergo charcoal filtration.

To be called an Irish whiskey, the spirit must be fermented, distilled, and aged in Ireland. Ireland has multiple production styles for whiskeys, but one of the most unique styles is the single pot still. This style is a distillation method that combines raw, unmalted barley with malted barley and other grains.

Scotch whisky has strict production requirements, much like bourbon. Any bottle labeled Scotch must have been fermented, distilled, and aged in Scotland. Malted barley must be the primary grain in the mash. Malting is the process of soaking barely in water to germinate before drying. Scotch is aged in second-use barrels for a minimum of three years. They are most commonly classified by the distilling regions of Campbeltown, Highlands, Islay, Lowlands, and Speyside.

Japanese whisky is a newer spirit than the others but continues to increase in popularity. Japan doesn't have strict rules on production requirements, so any whisky made in Japan can be called a Japanese whisky.

Most Canadian whiskies are multi-grain blends, primarily with a high percentage of corn mash. They tend to be smoother and lighter than other whisky types.

You'll also see some whiskeys labeled single-malt or blended. Single-malt means the whiskey is from one distillery. With a blended product, distillers use whiskey from multiple distilleries. Blending whiskeys allows a distiller to produce a more consistent end product. Distillers who focus on single-malt whiskeys are working to showcase the specific attributes of a particular whiskey. You'll find quality whiskeys in both categories.

You can enjoy bourbon and whiskey straight, over ice, with water or mixers, or as an ingredient in a wide variety of cocktails. There is no right way to drink bourbon, as it comes down to personal preference. We recommend trying bourbon in various ways to see which you enjoy best.

You can try one of many whiskey or bourbon cocktail options. The next time you are in the bar, order one of these classic cocktails:

While often associated with the Kentucky Derby, you can drink a mint julep any time of the year. A mint julep is traditionally made with bourbon, sugar, spearmint, and ice. Regarding the type of bourbon to use in this cocktail, you can choose a high-rye like our Heigold Kentucky Straight Bourbon Whiskey or a high-wheat such as Dareringer Kentucky Straight Bourbon Whiskey. High-rye bourbons are typically spicier, while high-wheats are often sweeter. Be sure to check out our recipe for the best mint julep.

The Godfather only has two ingredients — Scotch and amaretto. Blended Scotch is the most common option, but it also works well with a single malt or bourbon. The original recipe has equal parts served over ice in a rocks glass. Some people find reducing the amount of amaretto results in a less sweet and boozier cocktail that focuses on the spirit itself.

The Boulevardier has some bartenders divided on bourbon vs. whiskey as the main spirit. The recipe traditionally called for bourbon, but some modern-day bartenders prefer a rye whiskey to add more complexity. If you like a Negroni, the Boulevardier is one of its many spinoffs, made with equal parts bourbon, Campari, and sweet vermouth.

If you want a smooth bourbon cocktail, try an Old Fashioned. The essential thing to remember with this classic cocktail is to use high-quality bourbon. You want a bourbon you would drink on its own. Otherwise, it won't taste very good, because an Old Fashioned is simply bourbon, sugar, bitters, and water. Finish by garnishing with an expressed orange peel.

The Sazerac is a classic New Orleans cocktail made with rye whiskey, absinthe, sugar, and two types of bitters. Initially, the Sazerac's main spirit was French brandy. Many believe the switch to rye whiskey came after grape phylloxera devastated vineyards in the 19th century.

A Manhattan is a great cocktail to compare bourbon vs. whiskey flavor profiles and get a feel for what you like best. You can make a Manhattan with bourbon or rye whiskey. Other ingredients include bitters and sweet vermouth.

This famous cocktail blends sweet and sour flavors. During the 1700s and 1800s, sailors struggled with scurvy on long voyages because of a lack of vitamin C. With copious amounts of whiskey and citrus on board sailing vessels, the whiskey sour became the perfect concoction. A whiskey sour typically has three ingredients — whiskey, lemon, and simple syrup.

The Brown Derby is classic Hollywood, possibly dating back to the 1930s and the Golden Age of film. A bartender at the Vendôme Club created the drink but named it after the nearby Brown Derby restaurant. Some people allege the origin story isn't correct, and the cocktail might've been created in New York. Regardless, the Brown Derby has become a beloved whiskey-based cocktail that is easy to recreate at home. It consists of only three ingredients — bourbon or whiskey, honey, and grapefruit.

Flavor Profiles of Bourbon vs. Whiskey

When you're trying to decide whether bourbon or whiskey suits your palate best, start by comparing the flavor nuances from each whiskey-producing region:

Some cocktail experts suggest a premium four grain bourbon as a good starting spirit for people entirely new to drinking whiskey. Its sweet notes make it more approachable. The stronger and more complex flavors in other whiskeys tend to be an acquired taste. When trying different bourbons, don't assume the oldest is the best. The longer a bourbon ages, the more flavor it absorbs from the barrel. Sometimes that can result in bitter, dry, and woody notes.

Don't give up if you haven't immediately started enjoying a more potent whiskey. Once you understand whiskey types and their characteristics better, finding the whiskey or bourbon that's best for you becomes easier.